Seven Days: Air Guard Sticking to Its Guns on Basing F-35 in Vermont 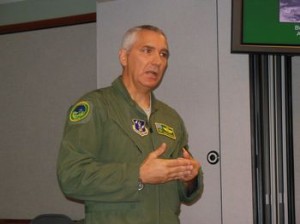 Seven Days journalist, Kevin Kelley, reports from Camp Johnson interviewing both General Dick Harris and Lieutenant Col. Finnegan who say, “The F-35 remains “the right fit” for the Vermont Air Guard, its top officer declared on Thursday — one day after the Winooski city council voted unanimously to oppose local basing of the plane.

During a 90-minute press briefing at Camp Johnson in Colchester, Gen. Dick Harris (pictured) and other Air Guard officers disputed that the F-35 would be significantly louder than the existing fleet of F-16s.

They also challenged the assertion by Vermont medical experts that many local residents exposed to noise levels now produced by the F-16 will suffer negative health effects.”

WRUV Radio: Interviews Chris Hurd on all things F-35 and upcoming events BFP: Winooski mayor says not so fast: not opposed to F-35