BFP: Winooski mayor says not so fast: not opposed to F-35 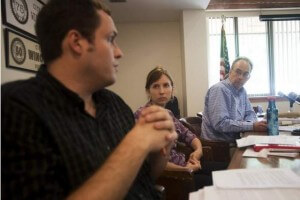 Free Press reporter, Joel Banner Baird, states, “(Mayor) O’Brien doesn’t want his vote against the basing of F-35’s to be construed as opposition.

A day after the Winooski City Council unanimously voted to inform the U.S. Air Force it disapproves of local basing for its new, noisier F-35 jets, the mayor (who votes with the council) said his stance has been misinterpreted.

“My interest was not to oppose the F-35,” O’Brien said. “I was trying to reach a compromise with different factions out there.”

Seven Days: Air Guard Sticking to Its Guns on Basing F-35 in Vermont VT Digger: both sides gear up as deadline for public input on F-35 report looms