3. ITS EFFECT ON OUR COUNTRY, 3. Technological Disaster, 4. Technical Flaws, News 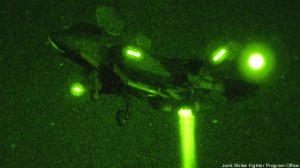 Journalist Sydney J Freedberg Jr. reports “Yesterday, at a subcommittee hearing attended by just half a dozen Senators, the Pentagon’s top weapons buyer made a blunt admission: The military’s most expensive program, the stealthy F-35 Joint Strike Fighter, has been hacked and the stolen data used by America’s adversaries. Under Secretary Frank Kendall didn’t say by whom, but the answer is almost certainly China,”

“So what does this mean for a future conflict? The nightmare — raised by a recent Defense Science Board report – is what you might call the Battlestar Galactica scenario: Our fighters close in on the enemy, the bad guys push a button, and all our systems shut down, crippled by cyber-attacks via “back doors” previous hacks created in the security software. In this case, thankfully, that seems unlikely. Kendall made clear that classified data has remained secure (so far, we think): It’s unclassified data in contractors’ computers that has been stolen, not the military’s secret codes.”

Breaking Defense: Senator Dick Durbin wanted to hear “if any alternative (to the F-35) is being considered for a less costly fighter.” VT Digger: Stationing F-35 Warplanes in Vermont is Incompatible with Human Rights