VT Digger: Videos and Article as Activists Blast Montpelier with Sound of the F-35 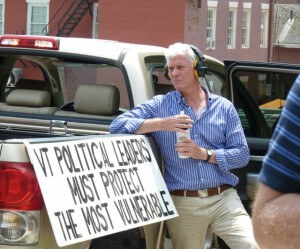 Journalist, Anne Galloway, reports that Chris Hurd, of Stop the F-35, a group that opposes the basing of the fighter jet at Burlington International Airport, played the roar of jet engines outside the Burlington mayor’s office and the governor’s office in Montpelier.

Hurd prefaced the demonstration with a short speech to reporters in which he castigated the state’s political leaders for refusing to meet with residents that would be in the flight path of the jet fighter.

“Let me first say we don’t want to do this and we apologize upfront to all Vermonters,” Hurd said in prepared remarks. “We don’t want to expose anyone to the staggering noise generated by an F-35 warplane. We don’t believe in it.