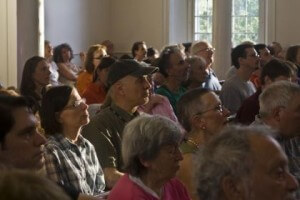 Vermont Commons Dylan Kelley reports on the recent Citizens’ Hearing held to a capacity crowd at Burlington’s Unitarian Universalist Church (atop Church Street) on May 30th, 2013.

An excerpt: “Most compelling of the speakers on Friday evening was “Gramma” Carmine Sargent, a resident of the South Burlington and emerging leader of the growing movement to stop the expensive aircraft so near to affected communities. “There could’ve been a better way to do this” said Carmine as she acknowledged the false logic of the aircraft’s property de-valuing affect in a region already stressed by low housing availability and homelessness. Emotionally recalling the slow decline of her neighborhood on the 41st anniversary of moving into her home, Carmine recalled the feeling of a community hollowed out “I felt like my little area of the world became little Detroit. I felt like I was a bystander in my own life. The F-35 feels like the final act of bringing the wrecking ball to our neighborhood: Our homes are our greatest assets, we deserve a say in what happens.” In closing, Sargent set a new bar for both the tone of the movement to oppose the F-35 as well as those passionately taking stances on other issues around the Green Mountain State, underscoring the point of the growing movement was not about being anti-military or anti-development, but pro-community: “It’s time to talk about what we’re for, not just what we’re against” she said, drawing enormous cheers and a standing ovation from the packed sanctuary of the U.U.”