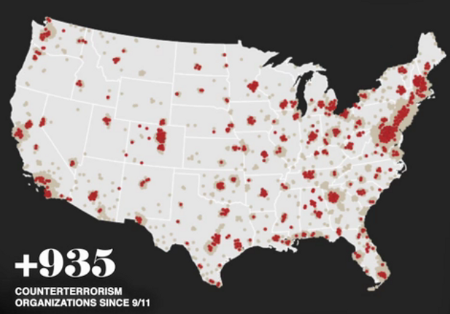 The system, by far the largest and most technologically sophisticated in the nation’s history, collects, stores and analyzes information about thousands of U.S. citizens and residents, many of whom have not been accused of any wrongdoing.

The government’s goal is to have every state and local law enforcement agency in the country feed information to Washington to buttress the work of the FBI, which is in charge of terrorism investigations in the United States.

Other democracies – Britain and Israel, to name two – are well acquainted with such domestic security measures. But for the United States, the sum of these new activities represents a new level of governmental scrutiny.

This localized intelligence apparatus is part of a larger Top Secret America created since the attacks. In July, The Washington Post described an alternative geography of the United States, one that has grown so large, unwieldy and secretive that no one knows how much money it costs, how many people it employs or how many programs exist within it.

Thanks to Ted Auch for the heads up on this great series.

Obama and the endless war From Pentagon, a Buy Rating on Contractors