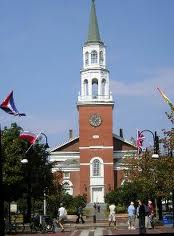 With our political, business and military leaders having COMPLETELY IGNORED opposition force’s repeated requests for open, transparent public engagement and dialogue around the basing of F-35  warplanes capable of carrying nuclear weapons, we were forced to take matters into our own hands.

Before a packed house at the Unitarian Universalist Church atop Church Street in Burlington Vermont, citizens heard first hand accounts from a resident severely impacted by their neighborhoods being devastated and turned into what she calls “Little Detroit”. Citizens heard about the morality and serious community consequences of such recklessness from longtime Rabbi Joshua Chasan Rabbi of Ohavi Zedek Synagogue in Burlington.

Please read the article that appeared the next day in the Burlington Free Press.

USAF Colonel Rosanne Greco spoke to veterans about the erosion of benefits and choices of hardware over people. She urged that we PUT PEOPLE  FIRST. PEOPLE BEFORE PLANES.

The keynote speaker, Pierre Sprey, is a co-designer of the F-16 warplane that is currently flying at the Burlington Airport. In addition, he co-designed the A-10 Warthog as well. Both of these planes are currently in the USAF arsenals. The F-16 widely regarded as a superior design, a pilot’s plane.

If you have questions or concerns or want to get involved go to our HOW CAN I HELP? section at this top of this page!! WE WANT TO HEAR FROM YOU AND WE WANT YOU TO GET INVOLVED RIGHT NOW! WE NEED YOU!

The revised EIS is out! The Jet That Ate The Pentagon – Brave New Foundations (8 minute film)