So President Obama released his much anticipated budget today and I took a couple of minutes to analyze the numbers to find the winners and losers. The results will surprise those on the right and left alike (See Figure Below).

The big winners are:

True many of these recipients could be considered liberal or dare I say the word “scientific” causes, but the fact is that there are many progressive recipients on The Big Losers list below.

1. Well we have to start with the undisputed biggest loser of them all and one you would think would be in the previous category given how often Obama, Democrats, and Republicans talk about the importance of small-business creation. The Small Business Administration is going to be 20{33979494efa9b9c28f844b5c37a1ddedf4bb90a2eb3dac7a83ede58b7eac2e67} of what it was in 2010 in the following 2 years if Obama gets his way. This will be an interesting pivot point around which we will see whether conservatives who say Obama is anti-business fight him OR whether the small businesses of America call Obama’s bluff and the Republicans if they jump in bed with him on this one invoking his recent placating speech at Tom Donahue’s Chamber of Commerce. This country is clearly decoupling both at home and in the workplace with Too Big To Fail Military contractors, Banks, and Agribusiness clearly in the driver seat not just with Republicans but with Democrats as well. What a shame.

2. OH and then there is military family housing, which one would assume everyone would want to increase with the patriotic rheotirc booming out of MSNBC and Fox News equally. I thought we valued our warriors and their sacrifice? Guess not because military family housing is set to shrink by 25{33979494efa9b9c28f844b5c37a1ddedf4bb90a2eb3dac7a83ede58b7eac2e67} 2010-2012.

SO WHAT IS THE POINT OF THIS BLOG? The point is that Obama has shown he is hardly a socialist, fascist, liberal/progressive populist and that with respect to the SBA we will see whether all those jokers on Capitol Hill really do care about small businesses because if the Obama administration gets it’s way the SBA will be hacked to a fifth of it’s size today.

If we don’t address the retirement age, tort reform, the military industrial complex leviathan, and things like Bureau of Land Management gifts to the coal/natural gas industry via infinitesimal land rents we are not being serious. Hacking away as the Republicans and Democrats are at discretionary spending, which depending on the year ranges from 10-12{33979494efa9b9c28f844b5c37a1ddedf4bb90a2eb3dac7a83ede58b7eac2e67} of the federal budget means that honesty is in short supply in DC and that faith is winning out over rationality. What a sham I mean shame! 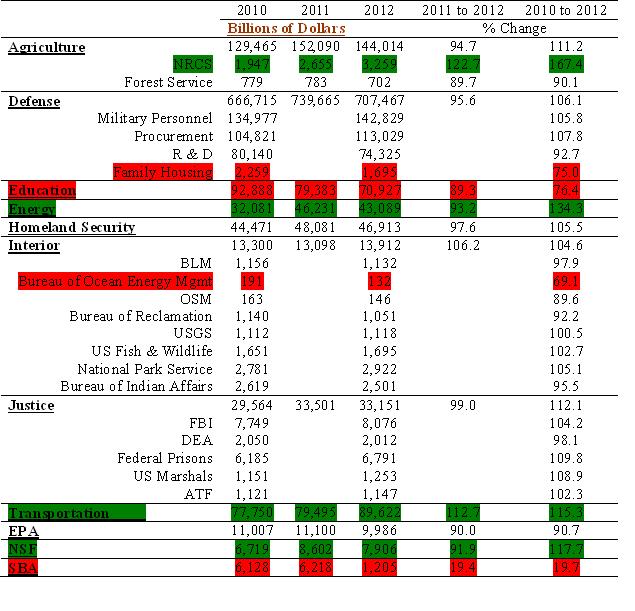 From Pentagon, a Buy Rating on Contractors Invitation to Sign on to Lawsuit