PUTTING PLANES BEFORE PEOPLE: HOW DEMOCRACY LOST TO THE F-35

WHENEVER a politician instructs you—as Council President Joan Shannon did at the close of a controversial Burlington City Council meeting—that although we may strongly disagree on this issue remember that “we are all Vermonters”, know that she is playing you for a fool. Because there are clearly two classes of Vermonters—those who wield political and economic power, can stack meetings, issue misinformation at will and call out the military to support their plans (the side that won the City Council vote)—and ordinary people in the majority who suffer the consequences of the establishment’s decisions, and who must campaign and organize for their future, for their rights and for their dignity.

Nearly 500 people marched into the City Council meeting on October 28 to testify for or against the basing of the boondoggle F-35 warplane at Burlington International Airport. Many were from airport neighborhoods threatened by the extreme noise of the jets. The City Council planned to hear testimony before voting on two resolutions initiated by the Stop the F-35 Coalition that would bar the plane. One would have banned the plane outright–the other would have imposed noise and crash rate regulations that would have effectively kept the warplane out as well.

Background Memo for the Resolution

In the coming weeks, residents, experts, and public officials will present the Burlington City Council with factual evidence and background on these and other issues to demonstrate the urgent need for Burlington as landlord to the Air Guard to reject the proposed F-35  basing.  The clock is ticking toward a horrendous basing decision by the Air Force. The time to act is now. Make your voice count.

The Burlington City Council will be deciding whether to authorize the basing of the F-35 warplane at its airport. The basing of this super loud plane would be in the middle of Vermont’s most populated and diverse residential community. Residents asked the City Council to take action at this August 2013 meeting. 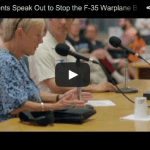