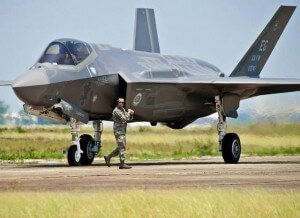 News Outlets across Vermont are reporting that the United States Air Force now acknowledges that opponents to the basing of the F-35’s in Vermont out number supporters of the warplanes.

BFP journalist John Briggs reports that the Air Force’s revised and updated Environmental Impact Statement just released (May 31st, 2013) incorrectly reported that supporters for basing the F-35 Warplanes at the Burlington International Airport outnumbered opponents by a wide margin of 8-2.

Nicholas Germanos, case study officer, at Langley Air Force base in Virginia admitted today that, “opponents of the F-35 basing at the Burlington Air Guard Station far outnumber supporters: “65 percent of the comments collected during the 2012 public-comment period are opposed to the F-35 basing decision for Burlington.”

Germanos states, “(he)was unclear how the error had occurred”. Germanos goes on to say, “the document was reviewed by the Air Force prior to publication and the error was discovered and was supposed to be corrected, but it wasn’t”.