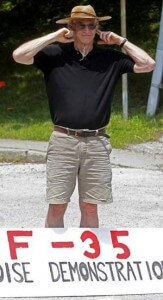 Associated  Press journalist, Wilson Ring, interviewed a passerby during today’s F-35 sound/noise demonstration. “Cordelia McKusick, of Shelburne Falls, Mass., was walking by the Statehouse with a friend when they were drawn to the noise. She called it “intensive and disturbing. “It felt like there were airplanes coming,” McKusick said. “It’s just an incredible sound.”

One of the opponents carried a sound meter that hit about 115 decibels, making it impossible to hear or speak when standing even about 100 feet in front of the speakers.