WINOOSKI – Applause could be heard throughout the Winooski City Council meeting room Monday after the council unanimously approved the city’s joining as a full party to a lawsuit regarding the U.S. Air Force’s environmental impact statement of F-35 fighter jets.

The decision followed a third heated discussion about the advantages and disadvantages of entering the lawsuit against Secretary of the Air Force Deborah Lee James.

As a full party, the city would retain its own lawyer in the lawsuit, forgoing representation by the current plantiffs’ lawyer, James Dumont. The council also approved the expenditure of $7,500 beginning after the meeting. This amount would be capped, and if the city planned on spending more, it would bring that issue back before the public and City Council for discussion.

WINOOSKI – City Councilors have narrowed their options down to two choices regarding their decision to enter a lawsuit on the environmental impact statement of F-35 fighter jets.

By the end of their discussion on Monday night, councilors decided they would vote next meeting on whether to join the lawsuit or just file a court brief by the next meeting. Either way, the council said they would not walk away from the charge.

The next meeting will take place on April 20.

The City of Winooski has sought legal advice as it explores options for joining a lawsuit regarding the basing of F-35 fighter planes in Chittenden County — though legal opinions conflict as the city moves closer to making its decision.

Plaintiffs who filed the case in U.S. District Court say the Air Force failed to provide enough information in the report it released in April 2014. At issue is whether the Air Force underestimated the level of noise and its potential impact on health, property values and safety for those in the flight locations. 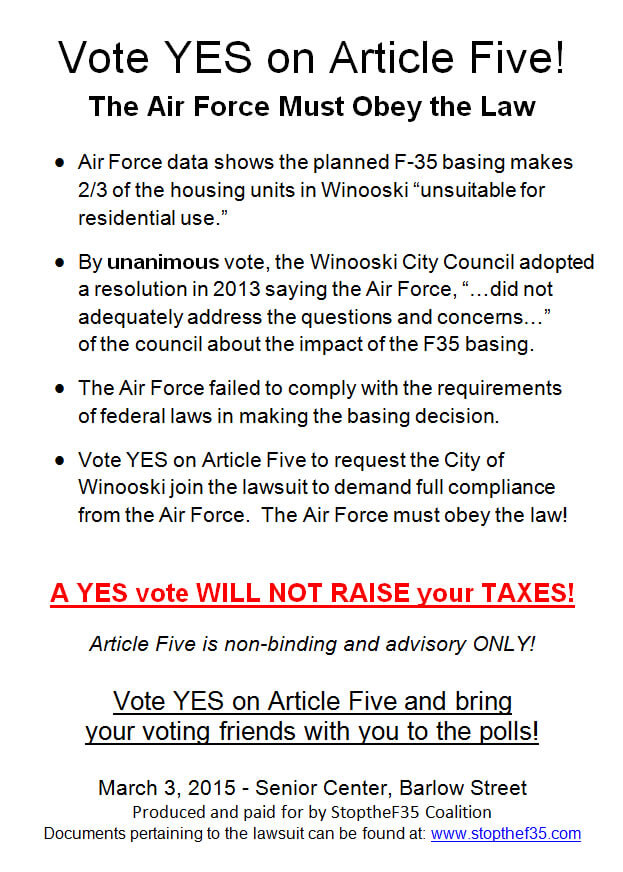 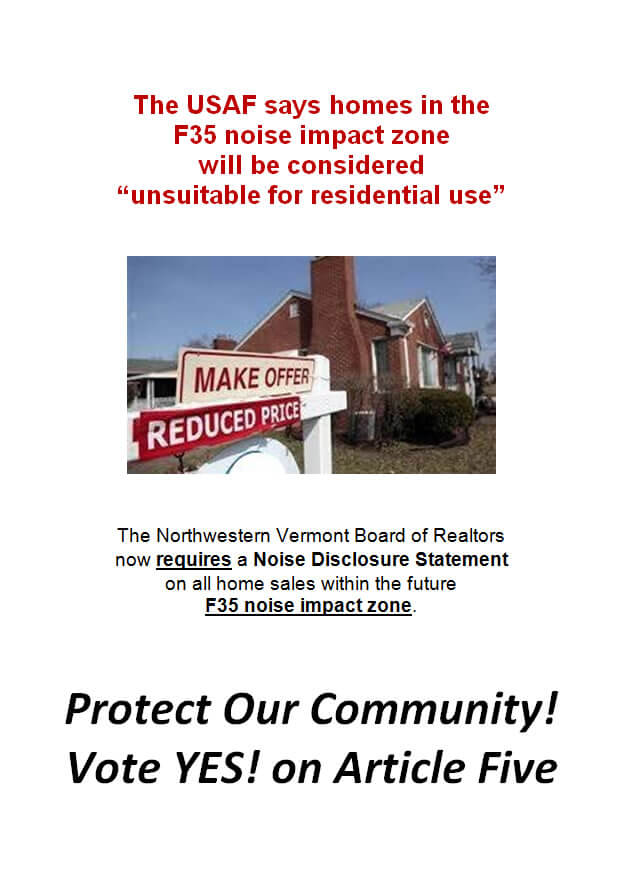 The ballot item is up for a vote in Winooski at town meeting in March 2015.

(Please Note: This is an advisory article only.)

Shall the city join Civil Action No.5:14-cv-132 filed in the United States District Court for the District of Vermont on June 30, 2014, the purpose of which is to set aside the Secretary of the Air Force’s decision selecting the Vermont Air National Guard (VTANG) to operate F-35 fighter-bomber jets at the Burlington International Airport (BIA); and, order the Secretary to prepare a supplemental Environmental Impact Statement that meets legal standards under NEPA (the National Environmental Policy Act) and/or to prepare the necessary environmental review under the National Historic Preservation Act: and, then to make the decision again after those reviews have been done?

Further, shall the city appropriate a sum of Seven Thousand Five Hundred Dollars ($7,500) as its payment for legal services related to this action?