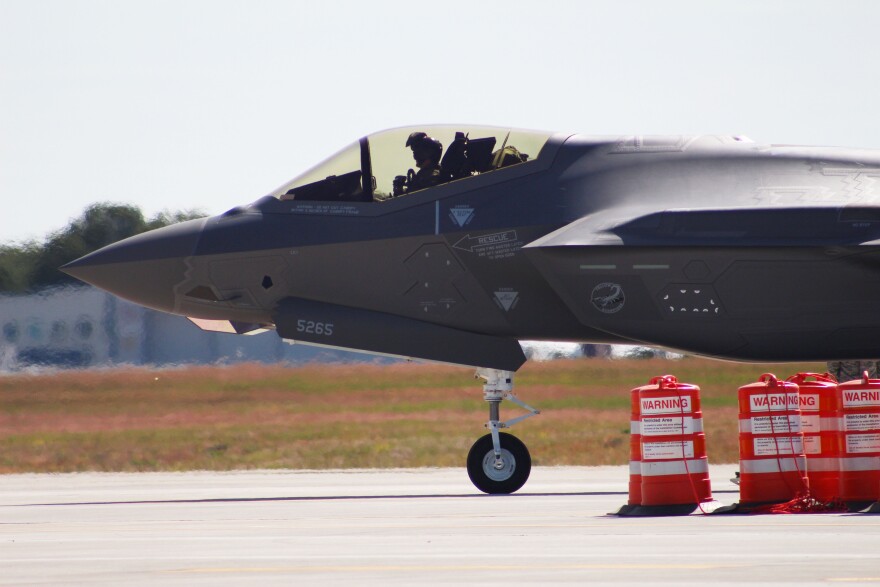 Brave Little State takes on a question about the complex, controversial decision to base the F-35 fighter jet in Vermont’s most populous county.

Bobby Arnell lives in Winooski with his wife and 5-year-old daughter. Recently, he recorded some audio on his smartphone while an F-35 fighter jet flew over his neighborhood.

In the recording, it’s difficult to understand him.

“This is Bobby Arnell, and I am recording what it sounds like to have an F-35 flying over our house!” he shouts as a kind of piercing rumble fills and distorts the recording. “This is actually being recorded inside my house! I do have the window open, but [unintelligible]!”

The F-35 is a super fancy military jet. It’s actually known as a “stealth fighter jet.” And there are 20 of them based at the Burlington International Airport. That’s where the Vermont Air National Guard takes off and lands for their training flights, roughly twice a day.

“It’s not like a commercial aircraft that flies over — and we have plenty of those that fly over Winooski as well,” Bobby said during a quieter moment. “This is … extremely loud, almost like a roar.”

“Almost like a rocket taking off,” says Joe Charboneau, also of Winooski. “Especially when it comes over the building and does its turns. Sometimes you can feel it.”

“They sound like they could be splitting the sky open,” Burlington resident Kayli O’Donnell says. “It’s a really deep rumble … like, you can feel it in your heart.”

[FULL ARTICLE]
Sound Effects — In the F-35’s flight path, Vermonters’ lives have changed F-35 flights are noisy but do Vermonters have authority to halt