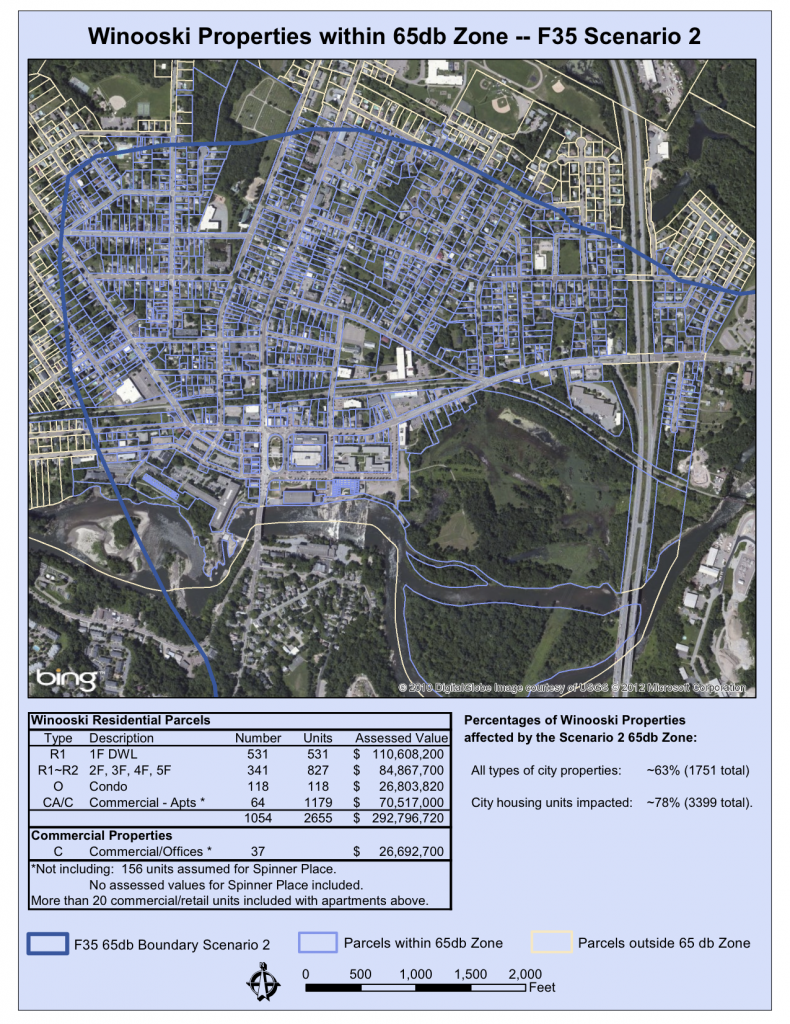 Fellow Winooski resident Horace Shaw and I have been working together to identify the specific properties which will be impacted by the proposed F-35 basing. This memo is to advise you of recently developed information which will be of critical importance in the evaluation of the impact of the basing of the F-35’s on Chittenden County communities.

We believe that there is a fundamental and significant error in the Environment Impact Statement (EIS) which must be closely reviewed and corrected prior to a final decision on the basing. It was recently discovered that there is a huge potential error in the EIS, i.e. a gross under-statement, in the estimate of the number of housing units which will be affected by the F-35 basing.

The EIS states that there will be 1,366 more housing units (in all of the affected communities) located within the 65 DNL zone (Scenario 2) as compared with baseline conditions. (Reference EIS BR4-30) The 65 DNL is the noise threshold that the FAA has determined to be “incompatible with residential use”.

The impact of the proposed F-35 basing on the populations and housing of the affected communities should be of pre-eminent importance in making a final basing decision. The discovery of an error of this magnitude, as it relates to one of the most fundamental and important elements of impact, casts doubt on the validity and reliability of the EIS report. No decision should be based on this faulty data.

Given the imminent announcement of the basing decision, we believe that it is urgent to make a formal request to the Department of Defense, Air Force and the Congressional Delegation, to defer the decision on basing until this issue is clarified and the data and analyses are corrected.

I have attached a map and summary prepared by Horace Shaw which identifies the Winooski properties which will be affected.  More work remains to be done to identify the specific number of housing units, in the other communities, which will be affected by the 65 DNL.  However, with the magnitude of the impact revealed by the Winooski data we felt it was important to get the word out on this finding.

Today, we met with Mayor O’Brien and City Manager Deac and shared this information. Deac promised to pass it along to Congressional delegation staff.

For questions on the technical aspects of the analysis you may contact Horace Shaw (863-3987; [email protected])